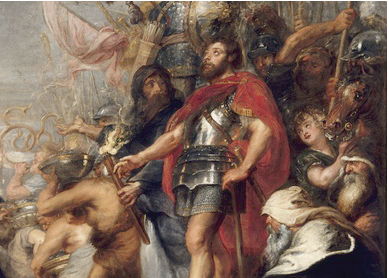 About the image: Peter Paul Rubens, The Triumph of Judas Maccabeus, 1634-1636, oil on canvas, Musée des Beaux-Arts de Nantes, Nantes. Used by tacit permission under Fair Use guidelines. Please visit Bible Odyssey for the latest historical and literary research on the Bible from the world’s leading scholars.

Let freedom ring. And for religious freedom to ring, secular and religious leaders, separately or together, need to lay hands on the bell pull.

On Thanksgiving Eve, the United States Supreme Court ruled that governmental restrictions of attendance at worship are unconstitutional.

The majority of Justices wrote, according to The Wall Street Journal, “Members of this Court are not public health experts, and we should respect the judgment of those with special expertise and responsibility in this area. But even in a pandemic, the Constitution cannot be put away and forgotten…the restrictions at issue here, by effectively barring many from attending religious services, strike at the very heart of the First Amendment’s guarantee of religious liberty.”

At issue in the case are New York Governor Andrew Cuomo’s restrictions of 10 to 25 worshippers in certain hotspots of the virus. The case was brought by the Roman Catholic Diocese of Brooklyn and Agudath Israel of America, representing Orthodox Jews, against the governor.

When the ruling was announced, Governor Cuomo downplayed its effect, suggesting that the restrictions had already been lifted. But surely the governor misses the main point: the restrictions, and even more restrictive restrictions, could be declared in the near future and at a moment’s notice. The ruling has the effect of putting into place a deterrent upon future restrictions and laying down a precedent that could, and would, be used to overturn them. The governor may hesitate before bringing restrictions again. Faithful people will be watching with interest.

While the Constitution protects religious liberty, religious leaders must appropriate that liberty for faithful people to enjoy it. Religious leaders, then, need to be more like the heroic Judas Maccabeus, who was victorious, than the ambivalent Rich Young Ruler, who “went away grieving” (Saint Mark 10:22), never commencing to grow into “the full stature of Christ” (Ephesians 4:13).