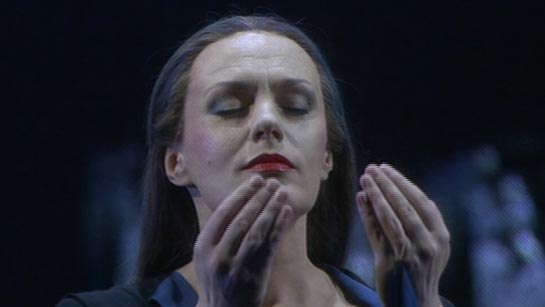 Waltraud Meier: The Isolde of our Time

Three outstanding video recordings of Richard Wagner’s Tristan und Isolde establish Waltraud Meier as the Isolde of our time. Each is an eminent recording, and each puts on display Meier’s vibrant musicality and powerful dramatic presence.

The first is the Bayreuth Tristan, recorded in 1995. Heiner Müller was the stage director, Daniel Barenboim the conductor, and Siegfried Jerusalem sang Tristan. Mostly Opera wrote of this production: “Watch this to listen to Daniel Barenboim´s glorious conducting without being disturbed by irrelevant stage action. And to have the ideal Tristan and Isolde combination in Waltraud Meier and Siegfried Jerusalem. Strongly recommended as my personal favourite.”

And William R. Braun writes in the January, 2015, Opera News: “Meier still gives us a centered, single-minded woman who feels things deeply, still has complete solidity and power from the moment of curtain-rise and still puts across more of the text than any other Isolde. She is particularly good at differentiating the character’s inner thoughts from her outward dialogue, and she has acutely observed the way Wagner’s music for Isolde often dismisses the music that comes just before it and the way Wagner’s words for Isolde often turn other characters’ words back onto themselves.”

The third is the La Scala Tristan, recorded in 2007. Patrice Chéreau directed, Daniel Barenboim conducted, and Ian Storey portrayed Tristan. Wagneropera.net wrote of this production: “Portraying the most vulnerable and fragile Isolde ever seen on stage, Waltraud Meier, reaches new dramatic heights in Patrice Chéreau’s production at Teatro alla Scala, now released in Europe on DVD. This is a tour de force from one of the greatest Wagner singer-actors of our time.”

There can be little doubt that for the present Waltraud Meier is the Isolde of our time unless and until the time when a greater vocalist and actor surpasses these electric performances.